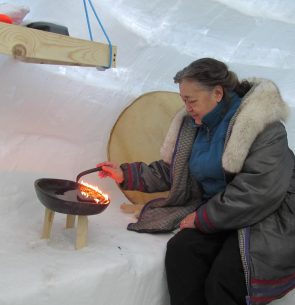 The era of old and new changes in Nunavut, from 1940 to present day: An Elder’s View

Levinia Brown was born in Dawson Inlet – just south of Whale Cove, in 1947. At a time when there were no nurses, doctors, or government services in that area, she was delivered by her father.

After completing her early education at schools in Chesterfield Inlet and Churchill, Manitoba, Ms. brown became the first teaching aid in Rankin Inlet. A graduate of St. Anthony Hospital in La Pas, Manitoba, Ms. Brown has worked as a Certified Nursing Assistant in the Northwest Territories, Britisk Columbia, and Alberta.

In 1978, Levinia Brown received her certification as a Northwest Territories Classroom Assistant and was instrumental in establishing an eastern board program (EATEP) in Iqaluit, and in 1980 she became the first chairperson of the Keewatin Regional Education Authority.

After serving as an information officer, chairperson of the local housing authority, and deputy mayor, Levinia Brown became the first woman mayor of Rankin Inlet. Establishing working relationships between government agencies and community governments was a high priority during her term.

A successfull career in municipal politics provided a natural step to territorial politics for Ms. Brown.

The Honourable Levinia Brown is a role model and leader for Nunavut’s youth. Dedicating her life to the development and promotion of community capacity building for health and social services, she projects a positive outlook on life. Her belief that life is a precious opportunity that should not be wasted in clearly expressed in her thirst for education, strength in leadership, and compassion for social issues.

Levinia Brown is married to Ron brown. Together, they have 7 children and 3 custom adopted children.